DAYS OF THE COYOTE

DAYS OF THE COYOTE
October 2019, Yellowstone National Park
(Click on any image to enlarge it)

Each visit to Yellowstone is always a new photography opportunity.  The abundance of wildlife can make for some excellent photography. Although I attempt to capture as diverse a selection of wildlife as possible when visiting Yellowstone, each visit has yielded different results for me. Also, the time of year that I have visited has provided different opportunities as well.  For this year it was the year-of-coyote for me.  My first encounter was on Firehole Drive.  This one was out hunting in the open fields.  I don’t know enough about how to identify them at a distance from their heads.  In the dog world, the male will have a larger more masculine head while the female’s head is smaller and more feminine.
The coyote is a canine native to North America. It is smaller than its close relative, the gray wolf, and slightly smaller than the closely related eastern wolf and red wolf.  They range in size from 32 to 37 inches long excluding the tail.  They can weigh anywhere from 20 to 50 pounds.  They are omnivores and can run in packs. The populations in America are increasing.


The next sighting was about five miles outside West Yellowstone.  True to form this one was hunting rodents in a sage-covered field.  Note it’s intensity.  It can hear them, in this case probably a mole, burring under the surface. Once it locks on to its prey it will jump in the air to pounce on it.  Whatever it heard it was unsuccessful at this time and probably due to being cognizant of my presence.

They will eat almost anything. They hunt rabbits, rodents, fish, frogs, and even deer.  Because they will prey on livestock and pets, they are considered destructive pests.  Coyotes have a keen vision and a strong sense of smell. Reaching speeds of 40 miles per hour is not uncommon. They form packs in the fall and winter for more effective hunting.


Two days later I came across my best opportunity, near Gibbons Falls along the Gibbons River to photograph yet another coyote this time a pair. The coyote had crossed a creek spur and stopped to check me out. Naturally, that gave me all the time I needed to snap a few images. I love the contrast afforded by the snow, trees, and running water.

They have strong family ties with both parents feeding and protecting the young.  In the wild watching coyotes track a rodent by sound and then pouncing by jumping in the air is a treat.  Until the reintroduction of wolves coyotes faced few predators in Yellowstone other than cougars, who will kill coyotes feeding on cougar kills.  After wolves were restored, dozens of coyote pups and adults were killed by them, primarily when feeding on a wolf kill.


In this next shot, something caught his/her attention and again made for an excellent composition in my opinion.


I track this guy/gal as it headed for deeper cover but still moving in a straight line when it entered a wooded area.  Because it was moving parallel to me I was able to anticipate that it was headed for a clearing in the woods which framed up this shot.  This is probably my best one of my coyote series.  The trees framed up the subject and its color made for some great contrast against the white snow.
A trip to Yellowstone is never without its rewards if you are into photography.  I have officially stayed at all entrances to Yellowstone National Park.  In addition to these coyotes, I got some great wildlife shots of other animals and some beautiful landscapes.   Although this would be enough to end this adventure I came upon yet another coyote on my way through the Gallatin Forest crossing the Teton Pass.  I am going to venture and say this may be a female.  Note her size and feminine head. Hope you enjoyed this post.  Please consider following me and sharing this link with your friends.
at December 30, 2019 1 comment:

DAYS OF THE COYOTE

DAYS OF THE COYOTE October 2019, Yellowstone National Park  (Click on any image to enlarge it) Each visit to Yellowstone is always a... 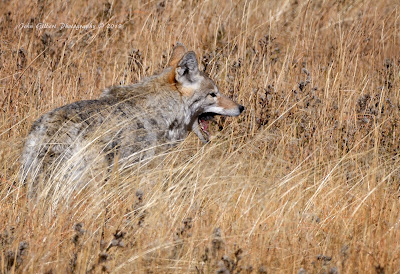 John Gilbert Photography
Greetings! I am an amateur landscape and wildlife photographer. I travel to National and State Parks as well as Conservation Areas to capture my subject material. My gear consists of Nikon and Olympus equipment.